See what kind of love the Father has given to us, that we should be called children of God; and so we are. The reason why the world does not know us is that it did not know him. Beloved, we are God’s children now, and what we will be has not yet appeared; but we know that when he appears we shall be like him, because we shall see him as he is. And everyone who thus hopes in him purifies himself as he is pure.
(1 John 3:1–3)

What God says goes. This makes sense to all of us, doesn’t it. He’s God. Of course what He says goes. We certainly know this when it comes to His commandments. God says it. He expects it done, and if it’s not we know that too: “I, YHWH, Your God, am a jealous God punishing the children for the sins of the father to the third and fourth generation of those who hate me.” God threatens to punish all who break His commandments, and for this reason we should fear His wrath and not do anything against them. 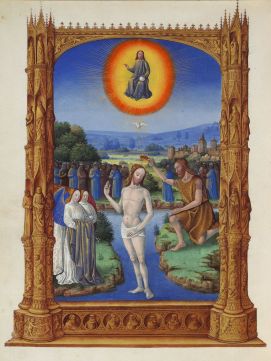 But there’s another aspect of what God says goes. It’s in what St. John has for us from his first epistle: “See what kind of love the Father has given to us, that we should be called children of God.” God calls us His children. He’s declared it so. Our baptism is just like Christ’s. At Christ’s baptism the Father declared: “This is my beloved Son, in whom I am well pleased.” So also you and me, when we were washed in the font, God’s water and words made us His children. To each of us He has said, “This is my beloved son, my beloved daughter, in whom I am well pleased.”

The world’s against us in this because it was against Him. It didn’t want to receive the Son of God and so killed Him instead, but, it was the greatest irony in history. They wanted to save themselves and killed the one who can save them, and by killing Him—that’s salvation. But He didn’t stay dead—He rose! This is the death and resurrection we’re baptized into as God’s children. But the world’s still against us. The devil’s against us, and even our own flesh is against us: “By nature we’re children of wrath,” as Paul says.

But in spite of what we see: we are God’s children. That’s John’s comfort for us. “Beloved, we are God’s children now.” God has said it, God has done it, and so it must be and is true. We struggle in this life because “what we will be has not yet appeared.” We can’t see it fully now, but it’s true nonetheless. It will be revealed on the Last Day because “we know that when he appears we shall be like him, because we shall see him as he is.”

This is our faith, our hope. That we’re God’s children, and as His eternal Son died and rose for us, so also we who’ve died and rose at the font, will die and then rise on the Last Day. Death won’t have dominion over us as it didn’t have dominion over Jesus. Our faith and our hope in Him purifies us. We’re pure as He Himself is pure. Pure and God’s child by faith—pure and God’s child by the font. We’re not just God’s children,—and it should come as no surprise—but we’re His saints too! God’s said so, and what God says goes. INI + Amen.

Children of the Heavenly Father (LSB 725)

Almighty and everlasting God, You knit together Your faithful people of all times and places into one holy communion, the mystical body of Your Son, Jesus Christ. Grant us so to follow Your blessed saints in all virtuous and godly living that, together with them, we may come to the unspeakable joys You have prepared for those who love You; through Jesus Christ, our Lord, who lives and reigns with You and the Holy Spirit, one God, now and forever. Amen.