God’s Word is a “lamp to our feet, and a light to our path” (Psalm 119). It’s important for Christians to read and listen to His Word, but we need to do it in a way that we understand His Word. Now, this doesn’t just mean “understand” it the way we want to understand it, or the way we think it should be understood, but we must understand it the way God wanted it to be understood. There’s a simple way to do that: context.

Context is important for understanding what people are saying, and this is no different than understanding what God’s saying. Let’s have two examples from our everyday life before getting into some Biblical examples. A man shouting “Run!” can mean many different things depending on the context. He might not be yelling at you to run, but he might be yelling at a running back for his favorite football team, cheering him on. But in  a different situation, if there’s some impending danger, he might be yelling at you to run away. If you’re a running back, the coach could be shouting this at you. They same goes for “Fire!” A soldier could be shouting this to his fellow soldiers in battle, or it could be someone warning others about a fire in the kitchen. In these examples, “fire” and “run” mean something different depending on where, when, or who is saying them.

The same goes for the Bible. To understand what God’s saying in a particular passage you need to know it’s context. There’s many different levels of context in the Bible. The first levels have to do with the placement of the verse in the Bible.

Where’s the verse located? That is, what’s before the verse, after it? (Not only verses, but chapters.) What book is it in? Who wrote it? Which Testament is it in? What’s the genre of not only the book itself but the verse(s)? (Is it poetry, prophecy, history, parable, letter, etc.?) All this will affect how you interpret the passage.

Another level of this context is the language of the verse(s). What language was it originally written in? (Greek, Hebrew, or Aramaic) What does that tell us about the Word used? Here’s a few examples. (1) “LORD” in the Old Testament means “Yahweh,” God’s proper name in the Old Testament. (2) “Torah” in the Old Testament doesn’t only mean “law,” as it’s almost always translated, but “instruction”, “teaching,” or even “Word.” (3) “Flesh” in Paul’s writings means “sinful nature.”

We don’t want to take God’s Word out of context. We don’t just cite Scripture because a verse or verses use language that we like or fit with what we’re trying to say. We want to know what those verses say in context otherwise there true meaning can be lost. This is important in an age of soundbites, of 140 characters or less (twitter), of memes. When people quote passages, look them up. Read the verse(s) in context. If the passage in context means what the person’s claim is, GREAT! If not, turn away because it’s not what God actually meant.

It’s dangerous to take God’s Word out of context. It could be twisted to mean something God doesn’t want. Taking passages out of context often points us to our own wants and desires. Twisting God’s Word leads us away from Christ because He’s their source and content. But that’s a topic for another time. 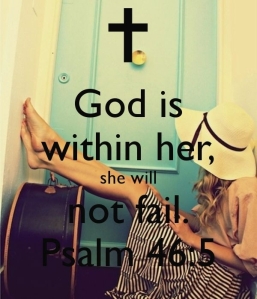 This picture (meme) quotes Psalm 46:5 to give the impression that God dwells in women and so they can’t fail at what they do. The problem is that this isn’t the point of Psalm 46 at all. Not even close. It may sound nice, but God doesn’t make this promise in Psalm 46. It’s false comfort. It’s a Christian-sounding motivational poster, but not a biblical teaching.

To the Chief Musician. A Psalm of the sons of Korah. A Song for Alamoth.

1    God is our refuge and strength,
A very present help in trouble.
2 Therefore we will not fear,
Even though the earth be removed,
And though the mountains be carried into the midst of the sea;
3 Though its waters roar and be troubled,
Though the mountains shake with its swelling.

4 There is a river whose streams shall make glad the city of God,
The holy place of the tabernacle of the Most High.
5 God is in the midst of her, she shall not be moved;
God shall help her, just at the break of dawn.
6 The nations raged, the kingdoms were moved;
He uttered His voice, the earth melted.
7 The LORD of hosts is with us;
The God of Jacob is our refuge.

8 Come, behold the works of the LORD,
Who has made desolations in the earth.
9 He makes wars cease to the end of the earth;
He breaks the bow and cuts the spear in two;
He burns the chariot in the fire.
10 Be still, and know that I am God;
I will be exalted among the nations,
I will be exalted in the earth!
11 The LORD of hosts is with us;
The God of Jacob is our refuge.

Psalm 46:5 isn’t about women. It’s about Jerusalem, the Church. The Church is the “city of God”, the “holy place of the tabernacle.” Psalm 46 is even about the promise of the heavenly city, “whose builder and maker is God.” (Heb 11:10) It’s a promise that Yahweh will guard, keep, and defend His Church, His bride, for whom He died and rose (Eph 5). It’s certainly not some pep talk to women that they won’t fail at what they do. That’s not why the Holy Spirit moved the sons of Korah to pen this Psalm. He moved them to pen this Psalm to proclaim the protection and salvation that Yahweh Sabaoth (“LORD of hosts”) gives and delivers to His bride, the Church.